After successfully recovering the entire radar station at the Wauwerman Islands, we headed out to Hugo Island and our shelf site, Station B (St. B). We had waited for a few days watching for better weather in order to approach Hugo Island, which is notoriously difficult to access because of rough seas for the small zodiacs we use to get from the ship to the islands. The seas had calmed, the wind died down and we had our window of opportunity. A team set out for the island to repair a GPS station (similar to the one we visited at Vernadsky Station earlier) and to remove a no-longer functioning weather station. After only a few hours, the team had accomplished its goals and the cargo was brought back to the ship. With good weather still on the horizon, we made our way out to St. B to retrieve our first sediment trap. 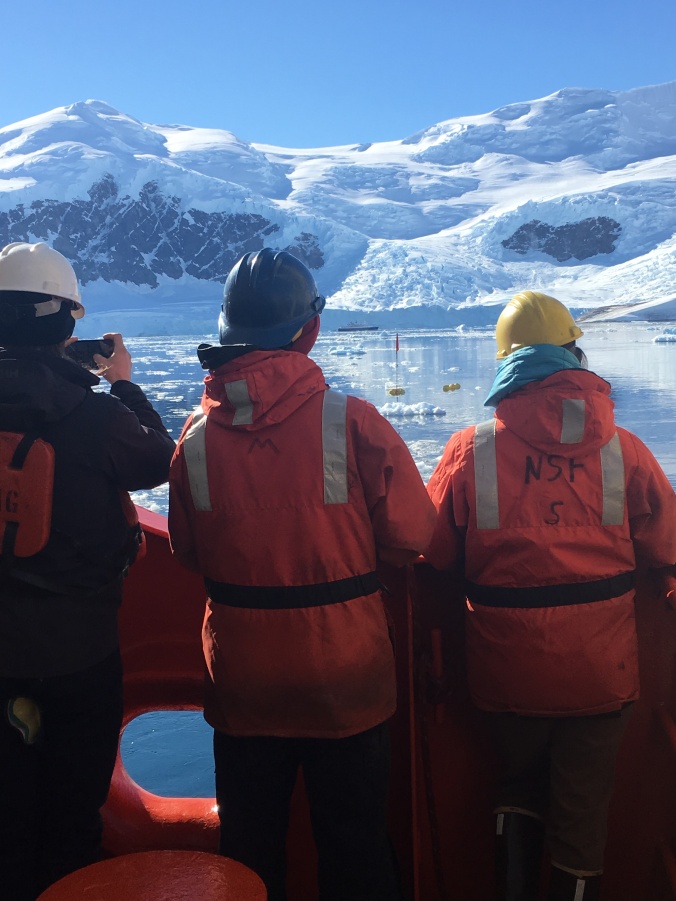 Scientists look on as the floats of our sediment trap mooring rise to the surface. Photo credit: Amanda Ziegler

Upon arrival at St. B, we lowered the transducer into the water and sent a signal to the acoustic releases down below. They responded informing us that our mooring was still where we left it 9 months earlier. We sent a release command and received confirmation that the anchor holding the sediment trap in place to the seafloor had been let go. The trap was now rising to the surface at roughly 40m/min. Scientists gathered on the bridge and the bow with binoculars to look out for the surfacing trap. After 11 minutes, it was spotted! The familiar orange flag and yellow floats was visible straight ahead of the ship. The captain repositioned the ship alongside the mooring slowly so that the techs on deck could hook the float line and hook it into the ship’s winch to haul it on board. Everything came on board smoothly and our sediment trap came back full of the material sinking through the water from the last 11 months.

The sediment trap being lifted out of the water complete with 21 sample bottles holding the material that sank over it during the last 9 months. Photo credit: Amanda Ziegler

We left St. B and meandered through the Bismark and Gerlache Straits back to Andvord Bay. Our time here has been extremely successful and pleasant so far. We are spoiled with wonderful weather, glassy calm sea conditions and spectacular views. Not a bad place to work! We repeated our acoustic search for our second sediment trap mooring and found it sitting happily on the seafloor in the middle basin where it was left. Recovery went very smoothly and revealed full bottles again. Last year, we had also placed cylindrical traps on the line below the sediment trap hoping to capture some material if the trap failed. These cylinders seemed to work great and yielded additional samples for us. 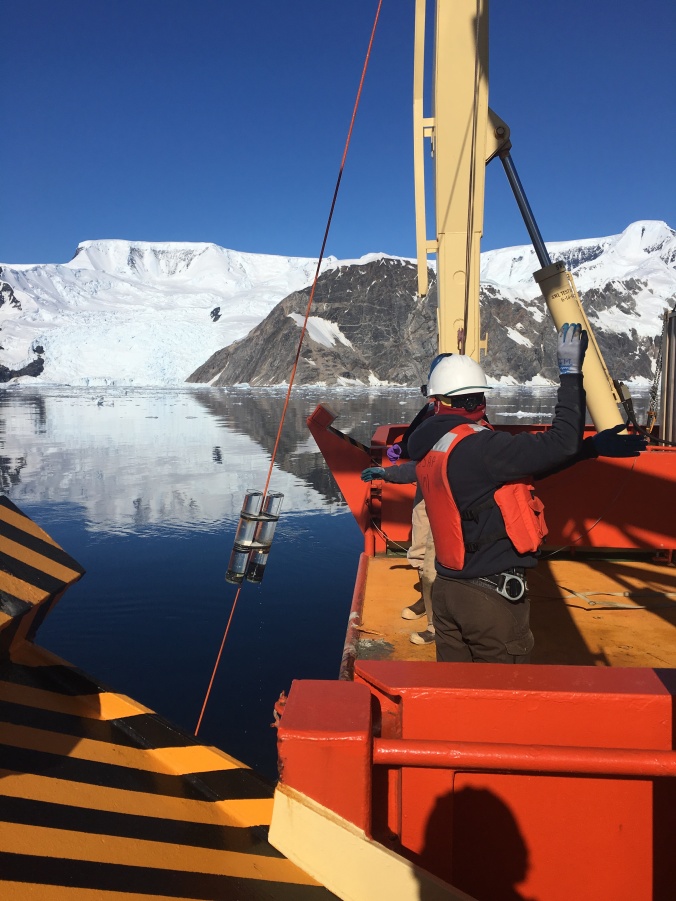 The cylindrical traps we designed in the event the conical trap above failed. Photo credit: Amanda Ziegler

With 2 of the 3 benthic ecology moorings retrieved, it’s time to pick up more physical oceanography moorings. The first was recovered smoothly, and all of the data recorded over the past 11 months were downloaded. This process can take almost 12 hours with 2 computers running simultaneously! The instruments do not have a way to communicate data in real-time so they all store data internally. This means that if we do not recover the instrument, we do not get any of the data back either. We learned this well with one of the glacier cameras which we had mounted deep in the inner basin of the fjord facing the glacial front. It was taking photos of the glacier every hour so that we could measure iceberg flux and make other observations while not present in the fjord for most of the year. When we returned to the site to retrieve the first glacier camera, the team found only pieces of the tripod, a battery pack, and no camera. Risky deployments can have the potential to pay off the most, so this was a risk worth taking, especially since our second camera was recovered in perfect condition with lots of amazing data.

Scientists assessing the site of the glacier camera in the innermost part of the fjord. It was no longer there. Photo credit: Lindsey Ekern